By JUDITH SUDILOVSKY Published: MAY 14, 2022
THE REMAINS OF an entire ancient Samaritan dwelling from the early Hellenistic period recently opened to the public by the Israel Nature and Parks Authority on Mount Gerizim are in surprisingly good shape.
(photo credit: Noam Ych’ye/Natanel Elimelech)

Rising some 886 meters above sea level, Mount Gerizim commands a majestic view over modern-day Nablus – biblical Shechem – in the valley below, and Mount Ebal in the north.

A short drive up from the edge of the Samaritan village of Kiryat Luza, ancient ruins from various periods – including the Persian, Hellenistic and Byzantine times – are scattered across the windswept mountaintop, most excavated between 1982 and 2000 by the Archaeological Department of the Civil Administration of Judea and Samaria.

Though entrance to the park is free for Samaritans, few members of the community visit the site, and for them it remains mostly a place for their three yearly pilgrimages, said Salwa Cohen, 33, a former hi-tech professional who helps her father run the Samaritan Museum in Kiryat Luza. 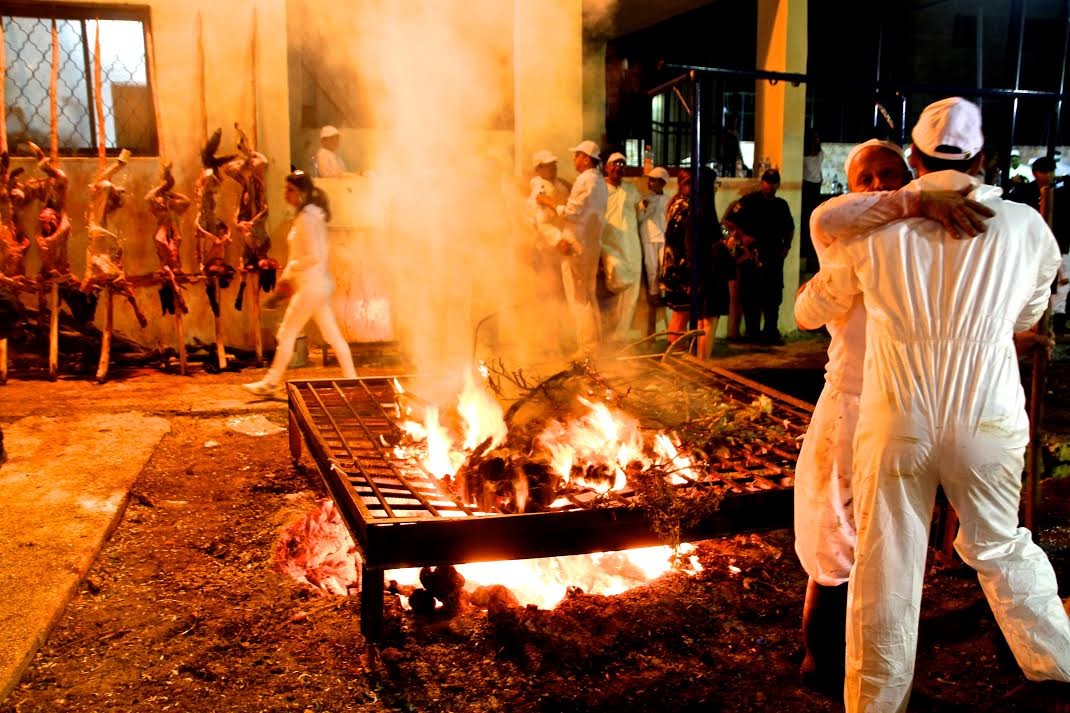 Samaritans burning the organs of the sheep (credit: TOVAH LAZAROFF)

Ovadia (Abdullah) Cohen, 27, a sometime tour guide for Mount Gerizim and Nablus, explained that in general the younger generation is less interested in archaeology, but he feels a “huge connection” to the place, especially because it proves the Samaritan community existed on Mount Gerizim for thousands of years and has an “Israelite identity.”

“That is something we are seeking, especially because Orthodox Jews do not believe that, which is denying our Israelite history,” he said.

In 2012 the Israel Nature and Parks Authority began new works under the authority of the Civil Administration, and two weeks ago a newly restored, impressive Samaritan residential compound was open for visitors, enabling them to experience history by walking through the ancient rooms.

The compound, dated at around 200-300 BCE, is part of a large city from the Persian and Hellenistic periods which was built around a sacred precinct where once stood the Samaritan Temple, and where today stands the remains of a large Byzantine church built on top of the destroyed Temple, a heavy wall cutting right through the holy Samaritan site where Samaritan tradition holds the Tabernacle stood. During the Muslim period a military guard post was built over one of the church’s towers.

The archaeological remains go back about 2,400 years, said site director Netanel Elimelech, with the remains of the Samaritan Temple from the Persian era the oldest.

The city was divided into four residential quarters, and the walls of the buildings around the outside of the city served as a city wall. Remains of streets and homes, two market squares, and shops were found during the previous excavations. Most of the buildings had a central courtyard surrounded by rooms. The city spread over 40 hectares, and was likely home for some 10,000 people.

The Sacred Precinct was built at the highest point of the city and was surrounded by a well-fortified wall. The Temple stood in the middle. According to archaeologists, during the Persian period, at the end of fifth century BCE, it covered a relatively small area of about 96 x 96 meters, and at a later stage, in the Hellenistic period in the second century BCE, it was extended to cover an area of 100 x 200 meters. The precinct was intended to receive the thousands of believers coming to the Temple for the three pilgrimage festivals, and offering the Passover sacrifice there.

Known to many because of the parable of the Good Samaritan told by Jesus in the Gospel of Luke, the tiny Samaritan community, which today numbers some 840 people, is divided between Kiryat Luza and Holon. Samaritans follow only the Five Books of Moses, have their own high priests who inherit the position from generation to generation, and do not follow any rabbinical teachings or celebrate post-Torah holidays such as Purim or Hanukkah.

Sworn enemies of the southern Judean kingdom in the Bible, the Samaritans identify themselves as descendants of the remnants of the Israelite tribes of Ephraim, Manasseh and Levi who survived the destruction of the Kingdom of Israel by the Assyrians in 722 BCE. According to their tradition, the majority of those tribes were exiled, but the Samaritans have remained on Mount Gerizim for some 127 generations.

Throughout their history the Samaritans were subject to slaughter and conversion by the conquering armies of the Assyrians, Greeks, Romans, Persians, Byzantines and Muslims. In 1011 BCE, with religious rivalry raging between Samaritans and Jews, Hasmonean leader John Hyrcanus, also known by Jews as Yohanan Kohen Gadol, destroyed Mount Gerizim.

Up until the outbreak of the First Intifada in 1988, when the Samaritans moved up permanently to Mount Gerizim as a community, they lived in Nablus, coming to their holy mountain on the three pilgrimage holidays of Sukkot, Passover and Shavuot, joined by their brethren from Holon.

THE OPENING of the residential complex is the first part of a conservation and renovation project being undertaken since last year at the entire site to bring it up to standards for tourists. It is one of the more beautiful residential areas of the city, said Elimelech. That, and its proximity to the holy precinct, led archaeologists to believe it may have been home to a priestly family. In addition, said Elimelech, archaeologists in the 1980s found a small golden bell here, which according to both Jewish and Samaritan scriptures were used to adorn the hems of the high priests’ robes.

An olive oil production center was located in the southern, narrower part of the building, which archaeologists believe was used to house workers and perhaps pilgrims. Southern windows opening out to an alleyway leading to the Temple may have been small storefronts catering to pilgrims. A portion of an outer wall built later in the alley was probably intended for defense against the invasion of John Hyrcanus, whose forces flushed the city out from west to east, destroying everything in their wake, said Elimelech.

The larger, more spacious western portion of the 1,600-square-meter building was most likely the family’s residential quarters, he said.

The remains of the entire structure are in surprisingly good shape – including intact 3-meter-high walls, ritual Samaritan purification bathtubs, remains of supporting stones for the combined ceilings/floors, and partial stairways which led to a second story of the building. The structure was well preserved largely because it had been covered up over time, Elimelech said.

An intricate system of cisterns and water canals were used to store water from rain and snow for the mountaintop residence, where there are no natural springs, noted Elimelech, and other finds indicate this method was used throughout the history of the site.

On a warm midweek day, the national park is empty except for a small group of American tourists finishing their tour and three young European women who have made the trek on their own.

Last year, when COVID-10 travel restrictions were still in place, some 15,000 Israelis came to visit the site. But for many of the Israelis in the nearby settlements, the attitude toward the Samaritan site is at best disinterest and in the worst case resentment, Elimelech said.

During the recent Muslim holidays, many Palestinians came to enjoy the park’s open space and view, he said.

Reaching Mount Gerizim, which is located in the West Bank just before Nablus, can present a challenge for some people for various reasons, including driving through the nearby Palestinian village of Huwara, acknowledged Elimelech. He hopes that a planned bypass road around the village will soon be completed, he said.

“I know it is difficult to come here but… also Masada is a very remote spot and shows a very short time in history… here we have approximately 1,000 years of history,” he said. “People still worship here. We can share what this place is…. When we opened this year, I considered it a revolution because now it tells the main point of its [Samaritan] history. My hope is that this a real step in its development, and that in five years from now, when people visit, they will experience the Temple city.”

He hopes, he said, that Samaritans will also experience their history at the place.

THE COMMUNITY has good relations with Elimelech, but no official cooperation has been established, said Salwa Cohen, although the museum does sell tickets for the archaeological site, she said, and sometimes groups go to both places.

Still, she said, though she does not have a personal memory of the site before the excavations, from photographs she has seen she believes it was “more beautiful” before because it was in keeping with their traditions.

“I would prefer the park to be under Samaritan authority, but we are a very small group and don’t have the authority to handle it,” she said. “I honesty need to say they do a good job there, because they keep it clean and protect it by keeping out people who want to [vandalize it].”

Cohen’s father, Husney Wasef Cohen, who is a Samaritan biblical scholar, said the community elders had opposed the early excavations (those done between 1980 and 2000), which were nevertheless carried out in a way they did not approve.

“Before, we used to go up to the mountain, and we used to be close to God. We would go up and see all the green. We would feel with God. Jacob had his dream on Mount Gerizim; Abraham was asked to sacrifice Isaac on Mount Gerizim. That place is sacred for the Samaritans,” he said. “In time, instead of seeing a holy place, we see archaeological remains, and that affects you. I am head of the museum, and I am 78 years old, and it affects me. How will it affect my children and my grandchildren?”

Ovadia (Abdullah) Cohen said that while Elimelech is an “amazing guy,” and he appreciates the knowledge about the antiquities the archaeologists bring, after their past experiences with the previous excavations, the community is now warier of the official authorities involved at the archaeological site.

“Still, when you remember that we live on a mountain where our [ancestors] were living on these old stones, you start wondering about what the place was like when we were a big nation of a million people, and how the Tabernacle looked 3,000 years ago,” he said. “You start imagining and connecting to your past in a beautiful way.”