The Hoopoe is 25–29cm long, with a 44–48cm wingspan. This black, white and pink bird is quite unmistakable, especially in its erratic flight, which is like that of a giant butterfly. The crest is erectile, but is mostly kept closed. It walks on the ground like a starling.

The song is a trisyllabic “oop-oop-oop”, which gives rise to its English and scientific names. 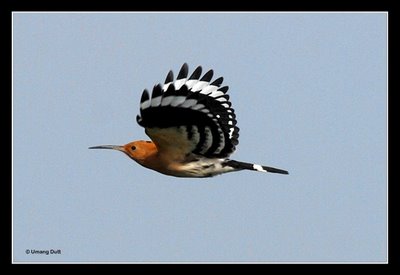 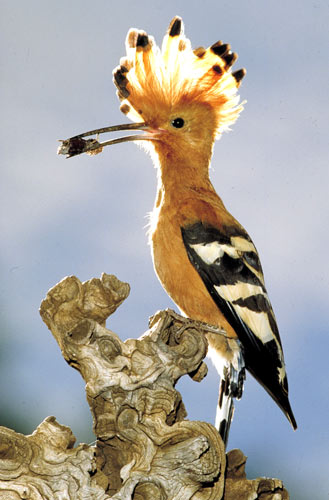 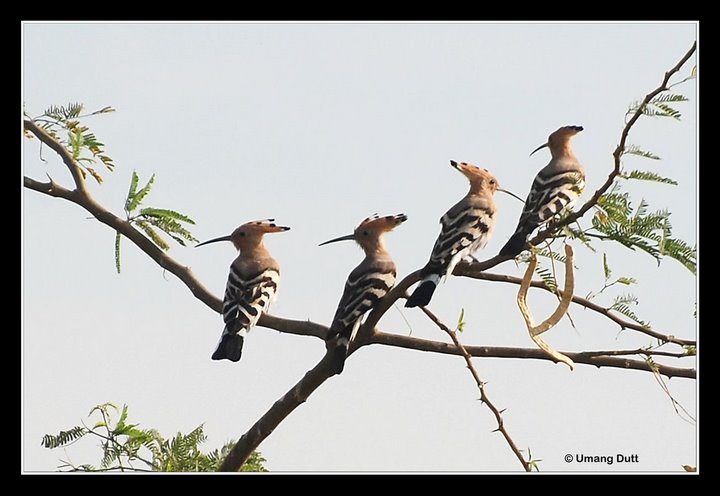 Dirty, treif, but fit for a king, the hoopoe’s our nat’l bird

Our newly crowned national bird, the hoopoe, may not be kosher or particularly hygienic, but it is fit for a king.

Hailed on Thursday by the Society for the Protection of Nature in Israel as the ideal choice for the honor, the hoopoe, known in Hebrew as duchifat, holds an ambiguous position in Hebrew scriptures.

Due to its association with King Solomon, the bird is traditionally viewed in a positive light. According to Jewish folklore (as well as the Koran), the hoopoe helped lead King Solomon to the Queen of Sheba. Unsure about the queen’s purity and motives, Solomon confided in the bird and trusted its advice. The king also praised the hoopoe’s observation techniques and called it “wise.”

In Leviticus 11:13-19, however, the hoopoe is among several creatures described as “detestable, abhorrent” and not to be eaten.

Still, in the race for modern national primacy, it easily met the strict competition criteria. The winner had to represent Israel’s character, be a permanent resident of the country and appear in Jewish tradition.

Israel is home to around 540 bird species. But bird-lovers had the chance to choose their favorite one from a shortlist of 10 species compiled by ornithologists. Ballots were placed across the country, including in national parks, the Ramat Gan Safari and the Jerusalem Biblical Zoo.

Tens of thousands of schoolchildren and soldiers took part in the vote, which was also held in 40 Israeli embassies and consulates worldwide.

The hoopoe, which will now get a stamp of its own and other elevated status symbols, received 35 percent of the vote, the warbler (pashosh) came second with 10.3%, and the finch (chochit) took third place with 9.8%.

In announcing the hoopoe’s landslide victory in the nationwide vote by over 155,000 people, President Shimon Peres said the primaries were the most successful in Israel’s 60 years of statehood, but expressed regret that “the most Zionist bird in nature,” the dove, had failed to make the finals.

“The dove is a very special bird,” Peres said, “because no matter where it goes, how great the distance may be or the obstacles in its path, it always returns home.”

The brainchild of Dr. Yossi Leshem, a former head of SPNI, the national bird contest was created to draw attention to nature conservation during the state’s 60th birthday celebrations.

The winner’s identity was revealed Thursday at a festive ceremony at Beit Hanassi attended by hundreds of bird-lovers from Israel and abroad.

“It was my choice from the beginning,” biologist David Glasner, director of the Jordan Valley Bird Watching center, told The Jerusalem Post.

“I think they chose [the hoopoe] because of its appearance and beauty,” he enthused. “It’s unique [and] special for Israel because it’s not common – you can’t see it in every field.”

The hoopoe is widespread in Europe, Asia and North Africa. It is already the national bird of Italy, and among many African, Native American and Afghan tribes, the bird is seen as a positive cultural symbol. In France the hoopoe is considered stupid, however, and in Greek mythology it symbolizes murder and death.

They hoopoe is distinguished by its colorful complexion, its long, swooping beak and slicked back tuft of hair. The bird builds its nest in tree holes and has a notoriously fetid odor, keeping excrement in its lair to ward off intruders.

“It’s not a very hygienic bird. It smells very bad,” Jonathan Meyrav, a bird expert at Kibbutz Lahav in the Negev, said with a laugh. “It wasn’t my personal favorite – but the people have spoken.”