Every year, tens of thousands of Jews from all backgrounds arrive at Mt. Meron to celebrate the Jewish holiday of Lag Ba’omer, but why is this particular mountain so significant? 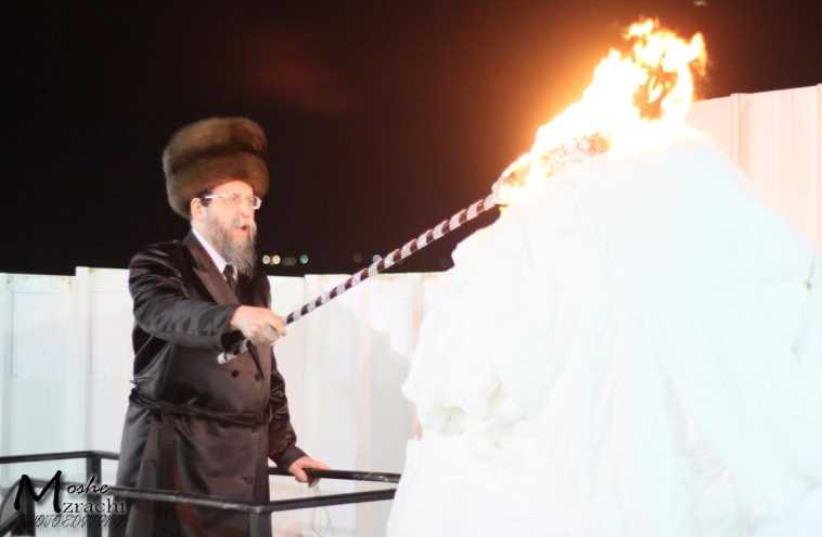 The holiday, which starts at sunset on the 33rd day of the Omer period, marks the transition from a period of mourning to a more joyful time.

According to the Talmud, a central text in rabbinic Judaism, God created a plague during the time of Rabbi Akiva that killed 24,000 of his students, leaving him with only five. One of the five remaining students was Rabbi Shimon bar Yochai.

While the first 33 days of the Omer are marked by mourning for the students who died, Lag B’aomer signifies a change in mood, as Jewish teachings say it is the day that the plague finally ended.
More than that however, followers of Jewish mysticism observe Lag Ba’omer as the yahrzeit of Rabbi Shimon, the day he died.
There is a tradition among Hassidic Jews to cut their sons’ hair for the first time at Mt. Meron, when the child is three years old, and this meaningful occasion is marked with candy, songs and dancing.
The bonfires that the followers of Rabbi Shimon bar Yochai light are representative of the spiritual light that can be found within the mystical teachings of the Torah, and they are now an intrinsic part of Lag Ba’omer celebrations around the world, but particularly on Mt. Meron.
Today, the bonfires on Mt. Meron also hold meaning for Zionist Jews who do not follow the teaching of mysticism, as they believe they represent the Bar Kochba rebellions. As such, the groups that arrive to the northern mountain every year are diverse, representing the many different streams of Judaism that come together to celebrate the small, yet significant, holiday.

It is perhaps the most insular, well-organized and cohesive of the groups that make up Israel’s haredi community.

Israeli rescue forces and police near the scene after a stampede killed dozens during the celebrations of the Jewish holiday of Lag Baomer on Mt. Meron on April 30, 2021.
(photo credit: DAVID COHEN/FLASH 90)

Many of the dead and injured  at the Lag Ba’omer stampede on Mount Meron Thursday night were from the insular  Toldot Aharon Hassidic sect, which is based in Jerusalem. The stampede took place during the lighting of the bonfire by the current Rebbe (spiritual leader).

It is perhaps the most insular, well-organized and cohesive of the groups that make up Israel’s haredi (ultra-Orthodox) community; any type of intervention in its domestic affairs is tantamount to a total usurping of the community’s belief system.
The hassidic sect was established in Jerusalem by Rabbi Aharon Roth  in 1928 as an offshoot of Satmar, a hassidic movement that originated in Germany. In 1942 shortly before Nazi Germany invaded Hungary, Roth and his followers fled Europe for Mandatory Palestine.

Today, Toldot Aharon hassidim live in the heart of Jerusalem despite their staunch opposition to Zionism. They have developed extensive social and cultural barriers to protect their community from the bustling secularism of Jaffa Road and Ben-Yehuda Street, located less than a kilometer away.

Roth, who died in 1947, started the tradition, which continues to this day, that every male member of the sect signs a contract obligating him and his family to abide by the strict dictates of Toldot Aharon.
Clothing, customs – even how the hassidim spend their spare time – is carefully regulated. Cohesion is as tight as super glue. In contrast, the outside world – especially anything affiliated with Zionism – is described as dark and evil.
Shlomo Guzmen-Carmeli of Bar-Ilan University’s Department of Sociology and Anthropology, who is an expert on the Toldot Aharon hassidim and is the source for the information here about them, explained in 2009 that the hassidim do not view themselves as individuals.
In his study The holy contract: The Social Contract of the Toldos Aharon Hasidic group, Guzmen-Carmieli, along with Asaf Sharabi, wrote about the core texts of the Toldot Aharon community. One of the central books that the community follows was written by Roth and is called Sefer Takkanot ve-Hadrachot (The Book of Regulations and Guidance). He wrote the book toward the end of his life; it contains many of his stringent and mystical beliefs which are followed in the community until this day.
“Members of Toldot Aharon do not see themselves first and foremost as individuals. Rather, they see themselves as one organic entity,” said Guzmen-Carmeli. “No one would ever think of involving outsiders in internal issues of the community, let alone  representatives of the Zionist entity, which is perceived as an apostate body inimical to the sect’s belief system.”