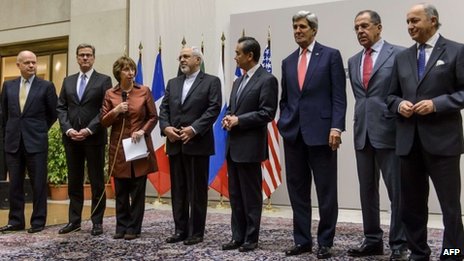 The deal was announced by the EU foreign policy chief Catherine Ashton, accompanied by the foreign ministers of Iran, the US, UK, Russia, China, France and Germany

POST-MORTEM OF A TERRIBLE AGREEMENT

An agreement has been signed against all logical arguments, and in spite of the repeated warnings by countries as diverse as Israel, Saudi Arabia and the United Arab Emirates (with the possible additional voices of Egypt, Oman, Bahrein and Qatar).  These variegated voices have been singing in a unique choir, which mixes Bibi Netanyahu´s baritone and the sotto voce additions of Sunni countries.  In spite of this, the “interim agreement” was signed today between the Islamic Republic of Iran, the five great powers plus Germany… and smiling Catherine Ashton of the European Union.

Ali Khamenei, Iran´s multibillionaire Supreme Ayatollah, must be undoubtedly ecstatic.  He has ample reasons for his glee.  His country, a theocracy out of the dark ages, with a ruined economy in a state of free fall, has been treated as the peer of the true economic and military powers of our long-suffering Planet.

Let us remember that the Iranian “gentlemen” who have signed the agreement continue to execute hundreds every year for “crimes” such as practicing the Bahai religion, which promotes the brotherhood of all humanity, for being homosexuals, criticizing their horrid version of Islam, being atheistic, or “apostates” from the only admissible “straight path”.  These fine specimens now are the peers of the United States, Great Britain, China, France, Germany… and smiling Catherine Ashton of the European Union.

This is not all, barely a day before the agreement in reference was signed, the “Supreme” Khamenei, dressed like a genie out of the “Arabian Nights”, reiterated, for the nth time, before an enthusiastic public made up of Revolutionary Guard gorillas and assorted fanatics of his entourage, his repetitive chants prophesizing  the disappearance of the “Zionist Cancer” (i.e. Israel) and the ever-present refrain of “margh bar Amrica” (“death to America”), which continues to be number one in Teheran´s Hit Parade.

It appears that Messrs. Obama, Kerry and company, have never bargained in a Levantine bazar… we are faced with individuals who have lived very comfortable lives (in Kerry´s case, absurdly comfortable).  They are not likely to have ever sweated to earn their daily bread.  They have always paid retail; bargaining is beneath their lofty status.  In this case, they went for the “asking price”, or may have managed to hand over a victory to their opponents even before sitting down at the “negotiating table”.  It is certain that if Obama, Kerry or Ashton had to make a living playing Poker, they would have starved long ago.

What cards were in affable Mr. Mohammad Javad Zarif´s hand?  Well, the capable Iranian Foreign Minister did not have much to play with:  a ruined economy, an obsolescent petroleum industry which even lacks the capacity to refine all of his country´s internal needs, a youthful population with no perspectives for the future, an outdated infrastructure which has been fully dedicated to the creation of nuclear weapons, regardless of the consequences, armed forces where the regular army and the Revolutionary Guards are in a state of never-ending confrontation and a nation which enjoyed an infinitely better social and economic situation in the days of the much reviled Shah Muhammad Reza Pahlevi, decades ago.

With such a lousy hand, the suave and sophisticated Mohammad Javad Zarif has bluffed like the best card shark in Las Vegas, and has managed to make fools of Messrs. Kerry, Obama and their respective teams and colleagues.  Kerry lost his underwear without even realizing he was no longer wearing his trousers.  Ali Baba must have been Persian.  Too bad Mr. Zarif is not on our side.

Who, pray tell, believes that Teheran´s foxes will truly “freeze” their uranium enrichment programs during the next six months?  Who, pray tell, believes they will put a stop to their construction of the underground plutonium plant at Arak?  To dilute their existing inventories of 20% uranium?  Pleeeeease!  Only people who still believe in Santa Claus, the Easter Bunny, the Tooth Fairy and Messrs. Kerry, Obama… and the ever-smiling Lady Ashton can believe such nonsense.

The Iranians not only have been given a Christmas present of six months of peace and quiet to continue their nuclear program, but, to add insult to injury, they are actually being paid several billion dollars for the privilege.  I would love to have the chance to negotiate with fools like Kerry…  Quid pro quo?  Who the hell needs such Latin phrases?  Let´s hand everything over a priori (another silly Latin phrase, sorry).  Let´s trust in the Persians’ good will… just look at their pretty smiles.

The “diplomacy” led by Kerry and Obama has managed to pull a miracle of Biblical proportions.  It has convinced every former ally and friend of the United States in the Middle East that nobody can rely on America for anything.

Well, but why worry, Mr. Chamberlain, sorry, Kerry, promises he will come and visit us here in Israel.  He will hold in his hot hands the little scrap of paper which has been signed by the Iranians.  Umbrella in hand, he will be so kind as to “explain” why we should share his happiness with his magnificent accomplishment.  Let us not forget that the original Mr. Chamberlain at least was sensible enough not to fly to Prague with the receipt of his sale of Czechoslovakia to the Nazis.  At least old Neville realized it was not “proper” to go tell the Czechs they had just lost their freedom and independence.  But Kerry seems to lack even that smidgeon of decency, perspicacity, or both.

I have often wondered why the Czech leadership surrendered to the pressure of the powers at Munich… why didn´t they say: “the hell with all of you, we will fight alone?”  A Czech friend tried to explain it once: Hitler hated the Czechs (who, after all, were Slavs), but did not threaten to exterminate them.  The bombing of Guernica had already demonstrated what fate awaited any city left to the mercy of the Luftwaffe.  The Czechoslovak Army could not rely on even one friendly border, the country was land-locked and the fight could only have one end, the destruction and complete annihilation of the nation.  They gave up, suffered seven years of brutal occupation, and today Prague is one of the few jewels of Central European architecture which was left untouched by the sheer massive destruction of World War II.  Czech casualties were minimal, when compared to all of their neighbors.

Israel, on the other hand, does not enjoy the “luxury” afforded to the Czechs.  We have no alternative, if we fall, we all die… defeat or surrender are not viable options.

Depressed by the news of this “magnificent accomplishment” in Geneva, my wife and I went to the Rosh Pina gym, as we do three times a week.  Gyms are pretty much the same the world-over: a number of TV sets surround the exercise area, delighting or torturing the users, music is blaring loudly, and an assortment of men and women are working-out, sweating profusely.

Nobody was even mentioning Geneva, Kerry, or their moms.  All talk was centered on sports, social life (the guys were talking about girls) and more sports.  One of the gym´s “regulars”, a short young man, wearing the tee-shirt of the paratrooper brigade, reminded me a lot of this country: small and muscular (without the latter quality being too noticeable), few words and very strong.  I asked him what he thought about the Geneva Agreement.  Without hesitation he answered, without a trace of braggadocio: “I am not worried… we will do what we have to do.”

When we got home, I started to watch the news in the new 24 hour news channel, “i24” and there was an interview with a pilot from our Air Force.  He was casually standing before an impressive supersonic fighter-bomber.  The pilot spoke with the natural tone of someone who was sharing breakfast with his best friends.  Without any drama or histrionics, and with the phlegm of a Londoner, the young man told the interviewer that his comrades and he have been working hard, training for “long range operations”.  He was fully confident they were ready “to do whatever it takes” as soon as the word comes from the executive.

The natural ease and self-confidence of the young pilot were totally contagious.  There is no doubt, there is a “new brand of Jew” being manufactured in Israel since 1948.  This brand is totally different from the old model, the neurotic New Yorker variety so beautifully depicted by Woody Allen.  The young pilot, understated and firm, transmitted strength, self-confidence and security.

When we watch TV news programs from “our neighborhood”, we see a plethora of histrionics, shouts, curses and sloganeering.  Enormous street demonstrations, almost always accompanied by shots in the air, violence or threatening gestures.  We don´t see much of that around here, and it would gain no respect.  Our public is more understated.  This country is not given to bragging… bluffers don´t get too much respect.

The young paratrooper in the gym and the pilot on i24 have managed to restore my calm.  Our security does not depend on Kerry, nor on Obama, and not even on the smiling teeth of Lady Ashton.

In the last resort, our security depends on young men like the paratrooper and the pilot, and on another element which is considered taboo among “progressive” circles, Divine Providence.

When Moses bid his farewell from Joshua, who was about to start the conquest of the Promised Land, he used two Hebrew words: “chazak ve´ematz”, which may be roughly translated as “be strong and courageous”.  These words are still valid, I will sleep well tonight.