The 2021 Israeli Election: Too Much Democracy?

The 2021 Israeli Knesset (parliament) election took place on March 23, yet as of the date of this correspondence, we still do not know who won. Well, actually we do know how many candidates from each of the contesting parties were elected to the Knesset, but we do not know who the next Prime Minister will be, or even if a government can be formed at all. How can this be? To understand the current political stalemate in Israel first requires understanding how Israeli elections are conducted. As we will see, a fair argument could be made that in Israel, voting is too democratic! Alternatively, one could argue that the election results are just an accurate reflection of Israel’s divided society.

In Israel, any citizen aged 18 or over as of election day can vote. Each voter casts a single vote for a political party. Each of the parties has a rank-ordered list of candidates. When all votes have been counted, parties which receive less than 3.25% of all votes cast are eliminated. The fraction of the remaining votes for each surviving party are then used to determine that party’s share of the 120 seats in Israel’s Knesset, with the specific candidates admitted to the Knesset selected according to their predetermined ranking on the party lists. There are additional details about vote sharing arrangements negotiated between parties before the election – – for example if a party has enough votes to win 10 seats but not enough to win 11, what happens to the surplus votes beyond those needed to secure the 10 seats – but basically what you have is proportional representation for electing members to the Knesset, subject to the minimum vote hurdle. The graph below shows the number of seats awarded to each party that crossed the threshold. 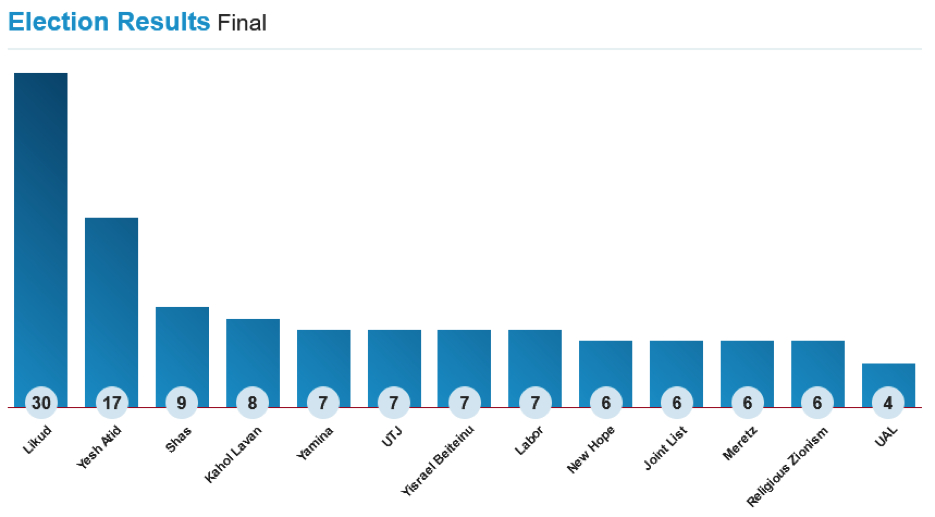 tried on corruption charges, while another party – Yamina led by Naftali Bennett – also is wary of joining Netanyahu and recommended Bennett to lead the government. This left the Netanyahu-led block with only 52 recommendations, short of the 61-vote majority.

Meanwhile, the parties of the Center – Yesh Atid, Blue and White, and Yisrael Beiteinu, accounting for 32 votes – joined the parties of the Left – Labor and Meretz, accounting for 13 votes – in giving Yesh Atid leader Yair Lapid 45 recommendations to form the government. Finally, the leaders of the two Arab parties – the Joint List and the UAL (also known as Ra’am) – declined recommending anyone to be the next Israeli Prime Minister.

President Rivlin had no choice but to offer Benyamin Netanyahu the chance to create the next government, even knowing he does not have the votes to reach a majority. The situation is further complicated by irreconcilable differences among different parties. Mansour Abbas, the leader of the Islamic Ra’am party, has stated he would be willing to support Netanyahu if in return he secured commitments to channel resources to Israeli Arab issues such as violence, education, health care and infrastructure, but the leader of the Religious Zionist party Bezalel Smotrich has made clear that his party would never join a government that relied on an Arab party for support. Avigdor Lieberman’s Yisrael Beiteinu party, which could conceivably provide support to a Right-Wing block absent Netanyahu, similarly refuses to join a government that includes the ultra-Orthodox Shas and UTJ parties. The Center block could conceivably work with Yamina and New Hope, but the latter are not eager to work with the parties on the Left.

And so it goes. One thing is clear: Israeli voters have clearly drifted towards the right since the days of the Oslo peace accords, and the parties of the Right do hold a natural majority as of now. Whether that can be parlayed into a functioning government remains to be seen. If Netanyahu fails to procure enough support to form a new government as appears likely at this time, perhaps enough individual Likud members will defect to join a Center-Right coalition led by Naftali Bennett and Yair Lapid to reach 61 votes. If no government can be created from the election results, guess what? There would be yet another election, Israel’s fifth in three years! Too much democracy? Time will tell.

Eitan and Yaeli are a couple that live in Northern Israel, near Haifa. Theirs is a mixed marriage – one is Ashkenazi and the other Sephardi. When they were growing up, both their mothers made a delicious, very common Israeli dish called Pashtida. Although both Eitan and Yaeli claim that Pashtidas are from their heritage, they are delicious wherever they came from!

There are many ways to make a Pashtida – dairy, vegetarian, or with meat – and like all recipes you’ll find in this column, relatively difficult to ruin. The recipe below includes a topping of cheese (think Shavuot!) but this dish is almost as good without. You need onions, eggs and flour to make a Pashtida, but add any other vegetables you love and it will work. Enjoy!

o Dice the onion and sauté in a small amount of oil. Add mushrooms and cook until they start to soften.

o In a large bowl, combine the eggs, oil, water/stock, baking powder. Then add the flour. If you have “savlanut” – the Hebrew word for PATIENCE – you can stir out all the lumps.

o Add the onions and other vegetables to the bowl. Gently fold the warm vegetables into the batter.

o Pour the mixture into the prepared pan and sprinkle cheese on top if you like. Bake for about 45 minutes – until it looks golden at the edges.

Enjoy your Pashtida with a salad for a light and yummy meal. They are also great for a brunch – you can enjoy them hot, warm or at room temperature.