There Are Judges In Jerusalem

A lot has happened in Israel since we took you on a river ride down the Hetzbani river last month. Hamas indiscriminately fired over 4,000 rockets at Israeli civilians, Israel’s Iron Dome missile defense system prevented the vast majority of those rockets capable of causing civilian casualties from landing, and Israel’s air force punished Hamas with civilian-casualty-minimizing strikes that degraded Hamas’s rocket and tunnel infrastructure in the Gaza Strip.

Having established a ceasefire that appears to be holding after eleven days of fighting, Israelis are only now seeing the real results of their March 2021 election (see May 2021 Israel Matters), namely, the imminent announcement of an unprecedented coalition of parties across Israel’s political spectrum that will end Benjamin Netanyahu’s twelve years as Israel’s Prime Minister. Keeping up with such fast-moving developments is best achieved by keeping up with daily news from Israel by regularly checking Israeli news sites such as the Jerusalem Post (https://www.jpost.com/), Times of Israel (https://www.timesofisrael.com/), Yedioth Ahronoth (https://www.ynetnews.com/), and Ha’aretz (https://www.haaretz.com/). Familiarizing yourselves with these sites is the best way to stay current as events unfold.

Returning to events supposedly precipitating Hamas’s rocket assault last month, much of world media (both mainstream and social) is focused on a property dispute in the Sheikh Jarrah neighborhood of East Jerusalem. Hamas and the Palestinian Authority along with a rising chorus of pro-Palestinian websites and Twitter accounts accuse Israel of “ethnic cleansing” and “Judaizing Jerusalem” in Sheikh Jarrah. The Palestinian narrative is pretty simple – families living in buildings in the Sheikh Jarrah neighborhood are being evicted to make way for more Jewish “settlement” in Jerusalem. Most of world media treats this as an Israeli government policy decision to “steal more Palestinian land.” Digging into the facts, however, reveals that this simplistic (and explosive) narrative is, well, false.

According to the International Legal Forum, what is happening in Sheikh Jarrah is a property dispute. The land in question was purchased from Arab owners in 1875 (!). Between then and now, well let’s see – there was the 1948 War of Independence, which led to the capture of Sheikh Jarrah (along with the rest of East Jerusalem) by the Jordanians and the forced eviction of the Jewish families living there. Jordan claimed ownership of the property as “Custodian of Enemy Properties” and leased the area out to Palestinian families in 1956. Note to readers – do any of you recall the forced eviction of Jewish families and subsequent turnover to Palestinian locals described as property theft? We didn’t think so. Time marches on, and with 1967 the Six Day War came and went, leading to the reunification of Jerusalem and the passage of a law in Israel enabling evicted Jewish families to reclaim their property. The disputed area in Sheikh Jarrah was reclaimed by its rightful owners in 1973 while Palestinian families still lived on the site. A 1982 lawsuit by the Jewish owners was settled in a mutual agreement that allowed the Palestinians to stay while maintaining the property and paying rent to the recognized owners of the property. In 1993, however, the resident families stopped paying rent while making various changes to the site. For almost thirty years, this property dispute has occupied the Israeli court system, reaching all the way to Israel’s High Court of Justice where a decision is pending.

At this point in the story, it is worth pausing and revisiting the main argument advanced by Israel’s detractors, who do not frame this as a property dispute but as more Israeli “land theft.” When confronted with the simple fact that this matter is in the hands of the Israeli court system, such critics respond, “So what – Israeli courts are just puppets and tools of the state.” Which requires us, dear readers, to remember former Prime Minister Menachem Begin’s response to Israel’s Supreme Court ruling in 1979 that the settlement of Elon Moreh was illegal and must be evacuated: Begin exclaimed “There are judges in Jerusalem” and accepted the Supreme Court ruling. Indeed, Israel’s court system, supposedly a tool and a puppet, is the same court system that convicted a former Israeli Prime Minister (Ehud Olmert), President (Moshe Katsav), and other cabinet and Knesset members for criminal offenses. And just today as this column is being written, Israel’s Attorney-General, when asked to intervene in the case of Sheikh Jarrah, declined and returned the case to the High Court, stating that there is no room for him to intervene “…in view of the many legal proceedings conducted over the years in relation to the real estate at the center of the dispute.”

And what of the local Palestinians representing their side in this dispute? Is there any recognition at all of the historical facts documenting that the land was forcibly taken from Jewish owners in 1948? Here is a direct quote from the leader of the Sheikh Jarrah demonstrations courtesy of the Wall Street Journal: We want all of Palestine, from the river to the sea … there is no such thing called Israel.”

So, this is the state of play in Sheikh Jarrah. That there is a property dispute is clear, but upon learning the history and role of Israel’s independent courts in adjudicating the lawsuit, is this really why Hamas fired all those rockets?

We’ll be back in September with in-person reports from Israel. Until then, have a great summer!

Eating like an Israeli (and a TBS Morning Minyanaire)

Israelis like to eat lox too, just like we do. Here is a six-day recipe picked up courtesy of the driver from the airport on a visit to Israel many years ago. The signature treat of the TBS Morning Minyan, here’s how to make it yourself!

1 very large bunch of dill, and several rosemary twigs with needles on (or a few packets of rosemary needles)

Two 2-2.25 boneless salmon fillets with skin on. Farmed Atlantic Salmon works great for this recipe; more expensive King Salmon is better but not worth the additional $$. Do not use wild/sockeye salmon as it won’t withstand the curing. 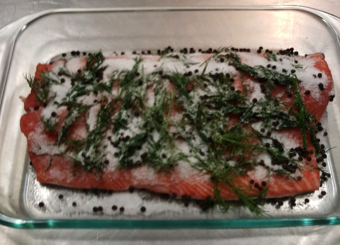 At the start of the first day, combine the peppercorns, sugar, and salt in a bowl. Stir and mix it well.

Put 4-6 sprigs of dill and enough rosemary needles so together they cover the bottom of a glass baking dish (do not use metal or stainless steel). To really infuse the fish with the dill, peel off the dill sprigs with the needles off the main stems and cover the bottom of the dish.

Sprinkle about 1/2 cup of the salt/sugar/peppercorn mixture (henceforth salt mixture) evenly over the bottom,

Save the remaining salt mixture in a plastic bag or small container, and also hold on to the unused dill and rosemary. Loosely cover the baking dish with plastic wrap and refrigerate overnight Congratulations, you’ve done the work for the first day!

At the start of the second day, pour off the fish oil that has been draw out by the salt mixture in the baking dish. Remove the fish to the side (on another plate or just on the plastic you covered the dish with on the first day) and add another ½ cup of the salt mixture to the bottom of the dish. If necessary (and not likely on the second day), remove any of the dill or rosemary that looks wilted or otherwise unhappy and replenish with more dill and rosemary needles. Put the fish back on its freshly made bed of salt mix/dill/rosemary (again skin side down), remove unhappy dill/rosemary and replenish from your supply, and sprinkle ½ cup more of the salt mix over the salmon. Cover the dish and refrigerate overnight. Congratulations, you’ve done the work for the second day.

At the start of the fourth day, repeat the third day. This is the final full curing day with refrigeration overnight.

The fifth day is rinse and rack day! On the morning of the fifth day, remove the salmon, rinse both sides thoroughly with water, and pat it dry with paper towels. Also rinse out the glass dish you have been using. On top of the dish space out a bunch of thin wooden kabob skewers across the width of the dish along the entire length of the dish. Place the salmon on top of the skewers, cover very loosely with plastic wrap so the fish can breathe, and set it on a counter *unrefrigerated* for the duration of day five. However, on the evening of day five, uncover the salmon, leave it resting on the kabob skewers on top of the dish, and refrigerate, uncovered, overnight. (Allowing the salmon to rest for a day after the rinsing enables to fish to continue “cooking” – it lets the curing compounds distribute evenly throughout the salmon.)

On the morning of the sixth day, it is ready to slice and serve. Slice very thinly and carefully at a shallow angle, working from the front of the fillet toward the tail, and eat it however you love to eat lox – with tomato, onion, capers, cream cheese on a bagel; or you can put it on top of greens for a nice salad. The sliced salmon also freezes very well.